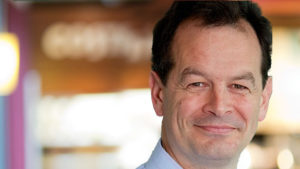 Nicholas Cadbury will join the board of Land Securities Group, the UK’s largest listed commercial real estate company, as an independent non-executive director.

Cadbury will become an Audit Committee member with effect from 1 January 2017. He will also succeed Kevin O’Byrne as chairman of the Audit Committee on a date to be confirmed in 2017.

Cadbury is presently group finance director of Whitbread, a position he has held since November 2012. Before that, he was chief financial officer of Premier Farnell, which he joined in 2011. He previously worked at Dixons Retail in a variety of management roles, including chief financial officer from 2008 to 2011. Nicholas originally qualified as an accountant with Price Waterhouse.

Dame Alison Carnwath, chairman of Land Securities, said: “I am delighted to welcome Nicholas to the board of Land Securities. His experience and background as a retailer and working in consumer-facing businesses will complement the existing skill set of the other board directors.

“His extensive financial experience also makes him an ideal successor to Kevin O’Byrne as chairman of the Audit Committee. I am sure that Nicolas will make a significant contribution to the board and I look forward to working with him.”