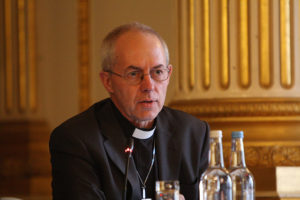 The most senior figure in the Church of England has backed a report which claims that there is a risk of “sleepwalking” into another financial crisis, without cultural change in the UK financial regulators.

Archbishop of Canterbury Justin Welby, a former oil company executive, said the report from think-tank New City Agenda was a reminder that regulators need to “practice what they preach” on culture.

“New City Agenda’s report into cultural change in the UK’s financial regulators is an important piece of work which reminds us that restoring trust requires regulators to practise what they preach,” said Archbishop Welby, who is a New City Agenda advisory board member. “The report sets out clearly the progress made by the FCA, PRA and Bank of England and where improvements are still needed.

“As the FCA has demonstrated with its action in the payday lending market, financial regulation can play a key role in protecting consumers. Regulators also need to ensure that their culture promotes access to financial services and supports the development of smaller community institutions and new entrants.”

New City Agenda’s report said that change since the crash of 2008 is already being watered down, and that the Bank of England and the Prudential Regulation Authority (PRA) need to “improve transparency and avoid group think”.

The report also called on the new head of the Financial Conduct Authority to demonstrate the organisation’s independence from politicians and prioritise cultural change.

“Leadership changes and the perception of political interference are in danger of making the FCA into a timid and cowed regulator.”