Financial services firms sign up to charter committing them to promote women in top roles. 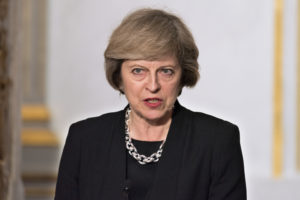 The prime minister has said not enough women are winning top roles in UK financial services.

Theresa May’s comments came as the Treasury released figures of how many big financial services firms have signed up to the Women in Finance Charter. Of the 72 signed up so far, 60 have committed to having 30% of senior roles filled by women by 2021.

“The UK is a world leader in financial services, but the sector could do even better if it made the most of many talented women who work in finance,” said the prime minister in a statement.

“Too few women get to the top and many don’t progress as quickly as they should or they leave the sector completely.”

The Ghadia review—led by Jayne-Anne Ghadia, chief executive of Virgin Money—found that women currently hold 23% of board positions in financial services, but only 14% on executive committees.

The research revealed that 50% of women, compared with 70% of men, believe they have an equal opportunity for progress at work.

Virgin Money and Legal & General are among 13 organisations to sign up to up to having complete “gender parity” in senior positions.

Theresa May said: “I want to see a diverse sector run by talented men and women and I look forward to seeing many more businesses promoting women and helping to make the UK the best place in the world to do business.”

Among the companies signed up to the charter, 20 have said their chief executives will be the senior officer accountable for progress against the targets.

Xavier Rolet, CEO, London Stock Exchange Group, said: “We are not just signing this charter to signal our ongoing commitment to equality in the workplace but also to actively challenge both ourselves and others in the financial sector to keep addressing these issues.”

Lynne Atkin, HR director, Barclays UK and Barclaycard, said: “Every part of our business is contributing to this agenda, we’ve supported the Davies commission and set [our] own targets for senior female representation at managing director [level].”