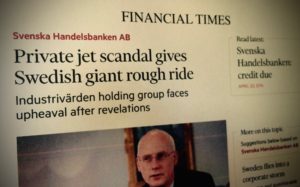 The much-admired Swedish model for corporate governance survived some pretty lurid newspaper headlines last year. For now, a series of high-profile sackings has headed off demands for root-and-branch change.

Under the lead of the Stockholm daily newspaper Svenska Dagbladet, the Swedish public learned in 2015 of excesses at the top levels of the country’s corporate management, ranging from private use of jets at the giant global hygiene and forest products company SCA, to what the Swedish Shareholders’ Association (SSA—Sveriges Aktiesparares Riksförbund) describes as “dubious hunting parties involving auditors and other employees, spectacular trips to the European Cup and World Cup in football and Formula One races with family members”.

Companies named by the newspaper as having indulged in questionable ethical practices included the major bank Handelsbanken, the industrial holding group Industrivärden, and the steel company SSAB.

They are among the blue chips of Swedish industry and it was the press spotlight on the links between them, specifically the cross-investments in each other’s equity that have prompted concerns within Swedish business and government.

Under the Swedish system, outside investors with enough shares can sit on nomination committees with rights to approve or sack directors, giving them far more power over a company’s management than is the case in the UK or the US. These nomination committees are behind the concept of ‘active ownership’ which has been widely credited with Sweden’s business successes.

In a statement, SSA managing director Carl Rosén says that the articles and the aftermath “have laid bare a corporate culture that would belong in 1915 rather than 2015”.

“Is the Swedish corporate governance model ruined? No, but it has been seriously misused within the Handelsbanken sphere.”

“So what happened here?” he asks. “Is the Swedish corporate governance model ruined? No, but it has been seriously misused within the Handelsbanken sphere,” he says, referring to companies and other entities linked to the bank through cross-shareholdings, in this case involving SCA, Industrivärden and the Handelsbanken pensions trust.

Rosén continues: “The Swedish corporate governance model is robust but the sphere’s creativity has taken away important checks and balances.”

He explains that Swedish company law allows only one executive on the board; auditors report to the AGM, not to the board; and owners are represented in the nomination committees.

But cross-shareholdings have “opened the way for habits and procedures that cannot happen in a normal listed company in Sweden”, says Mr Rosén, with managers confident they may be protected by a cross-holding control owner.

We cannot be sure that the scandals are over but there has been a quite comprehensive round of sackings among Sweden’s top business people so far this year.

If Svenska Dagbladet takes the credit for bringing the story to the Swedish public, it could be said that the companies themselves, spurred on by organisations such as the SSA, have acted with some promptness in clearing out tarnished management. Whether this will be enough for the Swedish public and government has yet to be seen.

Albin Rännar, head of market surveillance at the SSA, says: “There has not been discharge of liability granted at the general meetings so there has been a continuation of our efforts to enforce a stable and strong governance structure within the companies.”

At Handelsbanken and SCA there has been “continuation of the changes that started last year and there have been changes in cross ownership—these have been cut, or dissolved partly at least,” Rännar tells Board Agenda.

All this change has been industry-driven. From the government there has been no action, thus far at least.

“In Sweden the system works a lot on the basis of self-regulation—inspired by the UK—and the government is not very much involved in matters like this.”

Mr Rännar explains: “In Sweden the system works a lot on the basis of self-regulation—inspired by the UK—and the government is not very much involved in matters like this.”

For instance, he says, company law legislation is largely based on EU standards, and complies with EU directives on takeover regulation, auditors’ responsibilities and fines for gross misconduct.

“Its governance system stands out—there’s a very strong pattern of cross-ownership and this focuses on the role of controlling shareholders versus minorities,” he says.

The interests of controlling shareholders against those of minorities is an issue throughout the world, but Dallas says: “I would argue that for the most part Sweden handles these issues better than other parts of the world, notwithstanding the potential problems that can crop up.”

Dallas declined to comment on specific Swedish scandals. But on the question of corporate governance voting rights, Mr Dallas says: “In Sweden, because they tend to have their act together, it’s always been the case that giving ownership rights to the controlling shareholder is seen as potentially a good thing, but there are vulnerabilities in that form of arrangement particularly when there’s a discrepancy between the interests of the different types of investors.”

Alan Osborn has more than 40 years’ experience as an international journalist, concerned mainly with European politics and EU affairs. He served for 13 years as The Daily Telegraph’s staff European Community correspondent in Brussels.