FIFA recently suffered yet another resignation over its governance. Bruce Bean assesses the world football body’s journey to reform and whether it has made any significant progress. 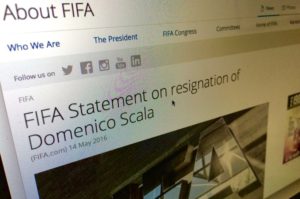 What’s this? Another FIFA “reform” official quits in disgust? Yes, Domenico Scala, chairman of FIFA’s audit and compliance committee and author of FIFA’s most recent reform proposals, made a noisy withdrawal from FIFA in mid-May after the FIFA annual meeting authorised its council to “swiftly remove” members of the audit and compliance committee and FIFA’s ethics committee who “breach their obligations.” Tragically, this is just more of the same from FIFA.

Since FIFA’s decision in December 2010 to have Russia and Qatar host the world’s most popular sport’s championship matches, FIFA has stage-managed a marvellous reform charade.

Responding to the media maelstrom that arose immediately after FIFA’s stunning announcement that the World Cup would be held in Russia in 2018 and in Qatar in 2022, five-time FIFA president, Sepp Blatter, announced a “Roadmap to Reform.” This cynical roadmap, which Blatter declared successfully completed in 2013, has led nowhere.

As requested, TI did prepare a corporate governance reform report entitled Safe Hands. However, TI withdrew from participation on the IGC, when it learned that this “independent” committee would not be able to review past-reported abuses and that FIFA was to pay the IGC chairman, Mark Pieth, $128,000 plus $5000 per day.

Alexandra Wrage, president of the international anti-corruption group, Trace, and one of the genuinely independent IGC experts, later withdrew from the IGC, declaring that FIFA was “neutering” some fairly uncontroversial corporate governance proposals.  She also described chairman Pieth as Sepp Blatter’s poodle, whatever that might tell us.

The report reviewing these three separate attempts to bring corporate governance standards to FIFA (TI’s Safe Hands), the separate Mark Pieth report and the IGC noted that of a total of 59 recommendations for reform proposed by these efforts, FIFA adopted a grand total of seven, with ten more partially adopted. The remaining 42 were completely ignored.

Whatever might be said about Michael Garcia, it is asinine to say he is naïve.

Garcia was asked to review the process that led to the selection of Russia and Qatar as future World Cup venues. Garcia’s two-year investigation concluded with a confidential 454-page report.

This Garcia Report was reviewed by the new adjudicative chamber of the ethics committee, led by Hans Eckert, a German judge. In late 2014 Eckert published a 42-page summary of the Garcia Report and announced that Garcia had found no discrepancies in the 2010 selection process.

One notable quote from the Eckert summary referred to a finding in the Garcia Report that bribes had been paid in connection with the voting on the World Cup venues. Eckert stated: “To assume … that envelopes of full of cash [$40,000] are given in exchange for votes on a World Cup host is naïve.”

Whatever might be said about Michael Garcia, it is asinine to say he is naïve. Now a judge on New York State’s highest court, Garcia is the former federal prosecutor who brought down New York’s sitting governor and prosecuted both the 1993 World Trade Center bombers and those involved in the bombing of the US embassies in Kenya and Tanzania.

Garcia characterised Eckert’s 42-page summary as containing “materially incomplete and erroneous representations of facts and conclusions” and demanded the publication of his entire report. When FIFA refused, Garcia resigned in disgust.

So much for FIFA “reform”

And now we have Domenico Scala quitting in disgust after the FIFA council was given the power to remove members of both the audit and compliance committee and FIFA’s ethics committee who “breach their obligations”.

Where did Blatter’s Roadmap lead? Although FIFA, as a billion-dollar Swiss tax-free enterprise, can afford the world’s best corporate governance and anti-corruption experts, the FIFA track record on actual reform is tragically laughable.

As we know, the US Justice Department indicted more than 40 FIFA-affiliated individuals and legal entities in 2015. President Blatter, however, was not indicted.

Once the indictments were announced, however, the Swiss commenced their own investigation, eventually causing FIFA to ban Blatter from football for six years for a questionable $2m payment to Blatter’s deputy, Jerome Valcke, the FIFA general secretary. Valcke too has now been banned from football.

The election of President Blatter’s successor occurred at a special meeting of FIFA in February 2016.  Several weeks prior to the election there were seven declared candidates, each a man from within the FIFA ecosystem.

One headline referred to these candidates as the “Seven dwarves—and nary a Snow White in sight“. Gianni Infantino, the general secretary of UEFA (the European football association) since 2009, was elected to succeed Blatter.

One headline referred to these candidates as the “Seven dwarves—and nary a Snow White in sight.”

This is an undeniably positive step. Samoura, the only woman executive at FIFA, comes from outside the indelibly corrupt FIFA ecosystem. Could she be the “Snow White”, someone who can actually commence reform?

Samoura, as FIFA’s second in command, appears to have a great opportunity to reform FIFA. And should Infantino be required to step aside, especially since the recent “Panama Papers” disclosures reportedly included references to him, Samoura may have an even greater opportunity to clean up the organisation.

If Samoura does effect positive change within the once-irremediably corrupt FIFA, and if she can avoid concluding that she too must publicly resign as TI, Wrage, Garcia and Scala have done, then, for the first time in FIFA’s sordid, corrupt history, the road to reform may begin.

Bruce W. Bean is a professor of law at Michigan State University.